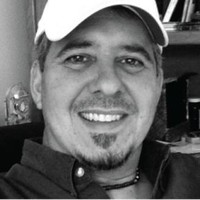 I consider myself a messenger, a delivery man; and I was given a gift in 2003 that I knew I had to deliver to the world.

The story of FUNetix began with my own struggle to try to save my 8-year-old son from a life of illiteracy or low literacy and the incredible hardships and challenges that that would bring upon him if he didn't learn how to read by the end of third grade.

My background was as a Spanish and Arabic linguist for the 101st Airborne Division, Ft. Campbell, KY. I was taught Arabic by the Army in 1985 via a 63 week, 6 hours a day, full immersion Arabic training regimen at the Defense Language Institute in Monterey, CA.

Languages like Arabic and Hebrew, use what is known as a diacritic vowel system to teach children how to read, and have been using it for more than 1,000 years.

When my 8-year-old son couldn't read and was going into second grade, my wife and I made the incredibly difficult choice to take him out of school in order to do what the school and the reading specialists and all the extra help had been unable to do, namely, teach him how to read.

We took him out of school, and I homeschooled him for a year; but as it turned out, he learned how to read in just 6 weeks. More on that in a moment.

You could say that I "invented" FUNetix; but personally, I feel that I discovered it. I was the right person (the right "father") at the right time, with the right crisis, and the right background, to see the connection between Arabic and English that led to an insight that saved my son from illiteracy.

I made a connection between what the Arabic and Hebrew languages had done 1,000 years ago to solve their "missing vowel" problem, and what my son was struggling with in English, with its 75% missing vowels, uncertain letter patterns, unpredictable pronunciations, irregular spelling, and the like.

I started the American Youth Literacy Foundation in 2008 to give FUNetix® away to the world, and to find a way to scale FUNetix to teach millions of children how to read, and to give my personal best effort to save millions of American children from that same illiterate, or low literate, life, virtually certain to be filled with incredible challenges, hardships and untold downstream difficulties throughout their lives.

By the time I started the American Youth Literacy Foundation, dba Youth Lit and YouthLit.org, the FUNetix reading curriculum had been in development for 5 years. Youth Lit started as a tutoring program with one tutor and one student in the suburbs of Philadelphia; and it grew to 16 locations and 35 tutors within one year, in Philadelphia and surrounding areas, from Northeast Philly to King of Prussia, and in central New Jersey from Princeton to Camden, tutoring 1st through 5th graders at YMCA aftercares, Boys and Girls Clubs, public libraries and urban cultural centers.

As an alum of UCLA Law School, I was able to acquire the pro bono services of one of my fellow alums' intellectual property law firm, which helped us prosecute our patent. It took us 9 years to earn the patent on the FUNetix Reading Decoding System. We had to turn over a lot of stones! We had to distinguish ourselves from ALL of the prior reading curricula, including ALL other phonics-based curricula that had EVER been invented and used in the United States and the world; and we had to show why FUNetix was different, why it was a new concept, a novel idea, a non-obvious combination of a solution that had worked for other languages, but that we were uniquely applying to English. (You can read about the "uniqueness" of FUNetix in the "Why It Works" section.)

After four years of running a successful tutoring program around Philadelphia, we needed to scale again, to reach out to the entire nation with what had become by then, a well-hewn, tutoring curriculum and system, anchored by a 200-page training manual, teaching all of the fundamentals of literacy instruction to high school and college (and some older adult) volunteer tutors. In 2012 we converted our training materials to online modules that would-be tutors could complete in order to become certified to teach in their local communities.

By 2015 we began to explore the opportunity to scale yet again, by building an app that could reach millions of illiterate children, instead of just a few thousand, and by creating a digital learning experience that would essentially codify and emulate the now 12 hour, one-on-one, tutoring/reading acquisition experience that we were delivering to children across the country, one child at a time.  (Remember, FUNetix was born long before the smartphone was invented. Our challenge had always been how to scale. Now the opportunity to move from an analog solution to a digital one, presented itself in the form of the XPrize.)

In 2015 we caught wind of the XPrize, an amazing global prize created by Peter Diamandis, and dedicated to solving some of the world's most intractable problems through the pooling of resources and incentives to attract creative competition. We took a serious look at the XPrize for Global Literacy, which was an $8 million prize designed to incent teams from around the world to build an app that would run on a Google tablet and teach kids in remote villages in Tanzania how to read and do basic math. For a variety of reasons, we opted out of this challenge. Then eight months later, the Barbara Bush Foundation and Dollar General Foundation put up a $7 million purse to incent teams to build a smartphone app that would teach adults in the United States how to read without any assistance from another person. We jumped on this opportunity to get our feet wet in the app development space and to see if we could win.

As fate would have it, I had inherited chronic kidney disease from my birth mother, and my kidneys were failing. After a year of competition and putting a team of 40 engineers, UX designers, graphic designers and other admin and support personnel together to build an app, we were essentially forced to abandon the cause when I had to go get a new kidney. The good news is that I was accepted into a clinical research trial at Northwestern University Hospital in Chicago, where I not only got a kidney from my best friend from high school but where I also had my immune system killed off by chemo and radiation and then received purified stem cells from my donor, which grew and became my own immune system that now protects my kidney for the rest of my life. I'm essentially one of only about 25 people in the world who has a cloned immune system protecting a donated organ and I'm happy to say that Phase III trials are ongoing now at Duke, UPenn, and Northwestern if anyone is in need and has a live donor and wants to look into this.

After a full and complete (but long) two-year recovery, I began building a new "Alpha" prototype for the FUNetix Childen's Literacy App building on what we had learned from the XPrize experience. Using rapid prototyping software called Ionic Creator, and basic Javascript and Angular code, I created 2 hours of content that could be played on any smartphone, anywhere in the country, or anywhere in the world. One of our volunteers at the time was a former elementary school teacher in Fairfax, VA and she took the app into a classroom of largely, Hispanic, ESL 2nd graders who were all struggling with reading. Five of these children tried out the first few modules of the app, and hardly any of them made any mistakes. They flew through the content and completely understood the initial sound symbols that were being taught and the basic blending concept innate to reading. (We have wonderful videos documenting their experience.)

Throughout 2019 we built and tested 1,300 screens of the alpha prototype with kids around the country (and took more videos of their amazing progress). In mid-2019 we reached out to XPrize looking for an engineering partner. In September of 2019, we partnered with a group called Pubbly, one of the $1 million finalists in the XPrize for Global Literacy competition in Africa. In November of 2019 we began building our FUNetix team, and today we have more than 70 incredible graphic designers, UX professionals, engineers, content developers, project managers, marketing and communications professionals, community outreach volunteers and many others, as well as 16 super talented illustrators; and together we've built more than 2,000 screens (40 modules), of wonderful, amazing content, all fully narrated by professional voice talent, and all emulating the one-on-one tutoring experience that we've been developing and honing for so many years, that takes most children from the ABC's to a second-grade reading level in just about 12 hours. We are beta testing the app with up to 1,000 parents and students nationwide prior to our launch at Thanksgiving and you can sign up to stream it now, on your desktop or laptop.

After 17 years of curriculum development, nationwide field testing, refinement and iteration, and after "employing" hundreds of tutors to teach thousands of children from all socio-economic and cultural backgrounds (including ESL students) across the country, how to read; and after seeing thousands of children learn the basic principles of reading and get through, what we call, the "Blending Breakthrough," in 4 hours or less, and go on to read grade-level books, with and without diacritics, in 12 hours or less, now the FUNetix Reading App is poised to reach, and teach, millions of children how to read, with minimal adult help or supervision, via a 2,000 screen, fully narrated, 40 module, gamified, digital learning experience!

The late, great Buckminster Fuller is quoted to have said, “You never change things by fighting the existing reality. To change something, build a new model that makes the existing model obsolete.”

The story of FUNetix is the story of a journey to make the old model of millions of children failing to learn how to read, obsolete. It has been a personal passion of mine, and a shared passion of hundreds of volunteers over 17 years who have a like-minded vision of a world with universal literacy and universal access to all that is great in this world, and all that is good, and all of life, and all of the world, that every child deserves a chance to experience.